The diagnosis of lymphatic malformations can present problems with diagnosis and treatment. Non-response to a chosen procedure can magnify the initial problems or create new ones. We present such a case.

A 9-year-old boy initially presented with a 3-year history of soft upper eyelid mass with red-violet discoloration after hitting his head on a wooden post. About 2 years before this presentation, progressive enlargement in size of the mass with extension to the left maxillary and left scalp region prompted an ophthalmologic consult, and Magnetic Resonance Imaging (MRI) of the orbit and Magnetic Resonance Angiography (MRA) of intracranial vessels revealed a venous-lymphatic malformation. (Figure 1) He was then referred to our institution for further management.

The patient was noted to have a 4x2 cm reddish vascular mass over the left eyelid with no thrill or bruit and a surrounding 9x9 cm bluish left facial swelling in the periorbital region extending to the maxillary area corresponding to the MRI images. A repeat MRI/MRA showed a prominent branch of the left external carotid artery coursing towards the mass. (Figure 2)

An angiogram of the neck for possible coil insertion into the prominent vessel from the external carotid artery was performed by interventional radiology. However, the left common carotid, left external carotid, and left vertebral arteries showed no evidence of high- or low-flow arteriovenous malformation. (Figure 3) This favored a hypovascular, space-occupying lesion consistent with a cystic lymphatic malformation and the boy was referred back to our service for possible surgery.

Meanwhile, the mass continuously increased in size and by the time he was seen again in our clinic, the mass measured 15x15x20 cm occupying the left hemifacial area from the midportion of the parietal bone superiorly to the body of the mandible inferiorly, with violaceous skin discoloration and verrucous infraorbital lesions. (Figure 4) The patient was not considered a good candidate for surgical excision due to the size of the mass relative to his body, and initial sclerotherapy was planned to possibly decrease the size of the mass enough for excision of any residuals.

Percutaneous Sclerotherapy was performed using a guidewire-catheter replacement technique. An initial drainage of 800mL of non-clotting serosanguinous fluid was followed by infusion of 3% sodium tertradecyl sulfate, followed by 99% ethanol infusion. There was gross decrease in the size of the mass after the procedure. (Figure 5) A pigtail drainage catheter was maintained to continuously drain fluid from the lesion. On the 10th hospital day, the boy had febrile episodes associated with enlargement of the left hemifacial mass. Blood cultures showed no bacterial growth. Culture of the pigtail catheter tip grew Morganella morganii. Amikacin 170mg IV every 8 hours was started but fever was unrelenting. Wound cultures grew Methicillin Resistant Staphylococcus Aureus, and Co-trimoxazole 40mg/200mg per 5ml Pediatric Suspension, 10ml every 12 hours and Metronidazole 200mg/5mL oral suspension, 5mL every 8 hours were initiated.

During this month-long post-operative period, the mass continued to expand to its preoperative size. (Figure 6) Due to lack of funds, the antibiotics were given by mouth and the patient was discharged. On 3-month follow up, the mass had grown to even larger than the pre-embolization stage.

Lymphatic malformations (LM) are made up of variously dilated lymphatic channels or cysts, lined by endothelial cells with a lymphatic phenotype.1  Histologically, LM is classified into the macrocystic type, consisting of cysts larger than 2 cm with clear boundaries, and the microcystic type consisting of cysts smaller than 2 cm that appear diffuse and sprouted without clear boundaries. The two types coexist in the combined type.2

A 5-stage clinicoradiologic staging system has been devised by de Serres et al. based on cervical LM laterality and relationship to the hyoid bone predicting operative risk and surgical outcome.3 The higher the clinicoradiologic stage, the greater the potential risk of intraoperative and postoperative complications.  In general, bilateral microcystic suprahyoid LMs are more difficult to treat than infrahyoid LMs, especially when there are microcystic LMs involving the oral cavity, tongue, and/or pharynx. In this case, confirming whether it was a high-flow or a low-flow disease presented a dilemma early on. We relied on the initial MRI/MRA findings of a possible arterial feeding vessel, considering that MRI/MRI is more than 90% accurate in the diagnosis of high-flow vascular anomalies.4 However, during angiography for coil insertion, there were no feeding vessels found and a low-flow disease was considered. Thus, there were further delays in management associated with these procedures.

In our case, the patient had a unilateral suprahyoid LM that has a complication rate of 41% with an average of 1.5 procedures to treat and cure the disease.3 The possible complications that were considered included facial nerve palsy, seroma, exsanguination and most importantly, functional compromise due to the projected large post-operative defect and location of the mass which could affect function of the left eye, feeding problems and long term facial disfigurement.5

Considering these possible complications, we planned to attempt initial sclerotherapy before considering surgery. However, we encountered infection of the pigtail site and wound, and sclerotherapy failed to decrease the size of the mass. At the moment, subjecting the patient to repeat sclerotherapy may have a higher chance of failure.

Noting that the treatment of lymphatic malformation should be directed towards preservation of functional and aesthetic integrity,5 we present our case for consideration. 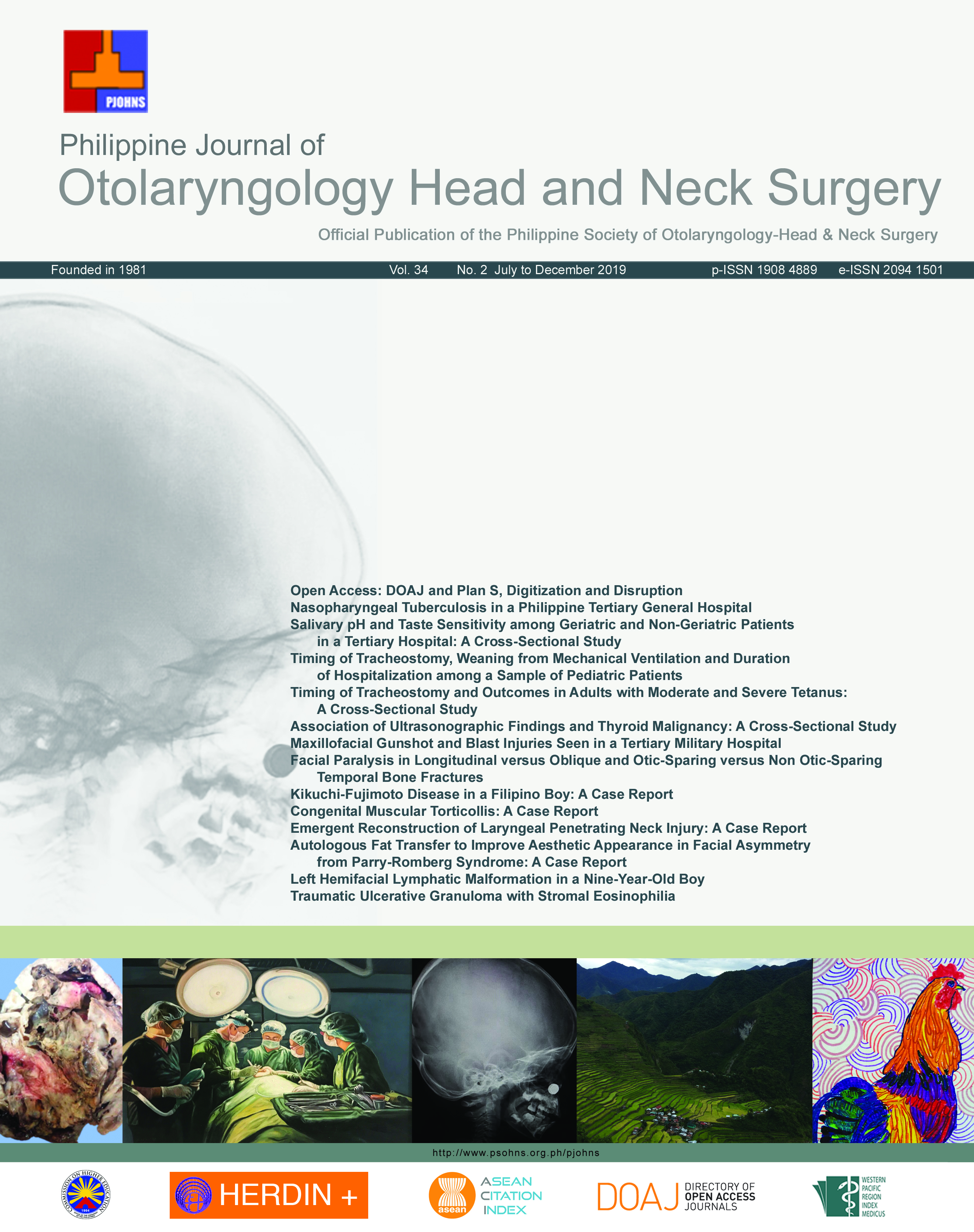 Vol. 34 No. 2 (2019): Philippine Journal of Otolaryngology Head and Neck Surgery