A 70-year-old man consulted for a mass of unspecified duration in the anterior area of the mandible. Radiologic information was not provided. An incision biopsy was performed by the dentistry service. The specimen received at the laboratory was labeled “cystic lining” and consisted of two light-gray to dark brown, irregularly shaped tissue fragments measuring 0.3 cm and 0.4 cm in diameters. Histological sections show biloculated cyst wall segments composed of fibrocollagenous tissue lined by an epithelial lining of varying thickness. (Figure 1) The latter consists of a thin layer of non-keratinizing epithelium with plaque-like thickenings that are composed of cells with a whorled pattern and variably clear cytoplasm. (Figures 2 & 3) Based on these microscopic features we signed the case out as a botryoid odontogenic cyst.

Botryoid odontogenic cyst (BOC) is a developmental, non-inflammatory odontogenic cyst derived from residual odontogenic epithelium such as the dental lamina.1,2 It occurs between the roots of erupted teeth and is typically multilocular. It represents less than 1% of odontogenic cysts. Most cases occur in the sixth and seventh decades of life and a slight preponderance of males has been observed.1 Other studies report an equal distribution between sexes.2 It most often occurs in the mandible anterior to the molars, particularly the incisive/canine and premolar regions.1,2 Most BOCs are asymptomatic and discovered incidentally on radiographs although occasionally bone expansion is observed.1 Radiologically, BOCs often present with a multilocular radiological appearance.2 This multilocular feature has been likened to a “bunch of grapes” (botryoid: from the Greek botrys – bunch of grapes, and oeides – in the shape of).3

Microscopically, the cyst locules are lined by a one-to-two cell thick non-keratinizing epithelium with plaque-like thickenings of cells in a whorled arrangement and connective tissue septa.1,3 Cytoplasmic clearing may be observed because of glycogen.1

The differential diagnosis includes a lateral periodontal cyst (LPC) and a gingival cyst (GC). Although their histological features are largely identical, a LPC is unilocular while a GC occurs in the alveolar ridge of infants.1-3 A BOC is often considered a multilocular variant of lateral periodontal cyst.2,3 Making this distinction however is more than just of morphologic interest but is important as BOCs are reported to give rise to recurrences unlike LPCs and GCs.2,3 An ameloblastoma may be considered because of the multilocular appearance although the microscopic features are sufficiently distinct to rule out this entity. An adenomatoid odontogenic tumor (AOT) may be considered because of the nodular thickenings with a whorled pattern. However, AOT is a solid tumor characterized in addition by the presence of rosette- or duct-like spaces with dentinoid matrix.

The recommended treatment is by enucleation.1 Successful conservative management with Carnoy’s solution has also been described.4 Peripheral ostectomy has also been recommended – a more aggressive approach being proposed as appropriate to extirpate any residual lesion.3 Recurrence has been stated to be between 15 to 30% which is largely ascribed to the multilocular characteristic of BOCs and consequent difficulty of complete removal, or of larger lesions.1-3 Thus, appropriate follow-up of cases or adjunctive therapy after enucleation might be warranted.2,3 To the author’s awareness, this is the first locally reported case of BOC after a search of local health research databases. 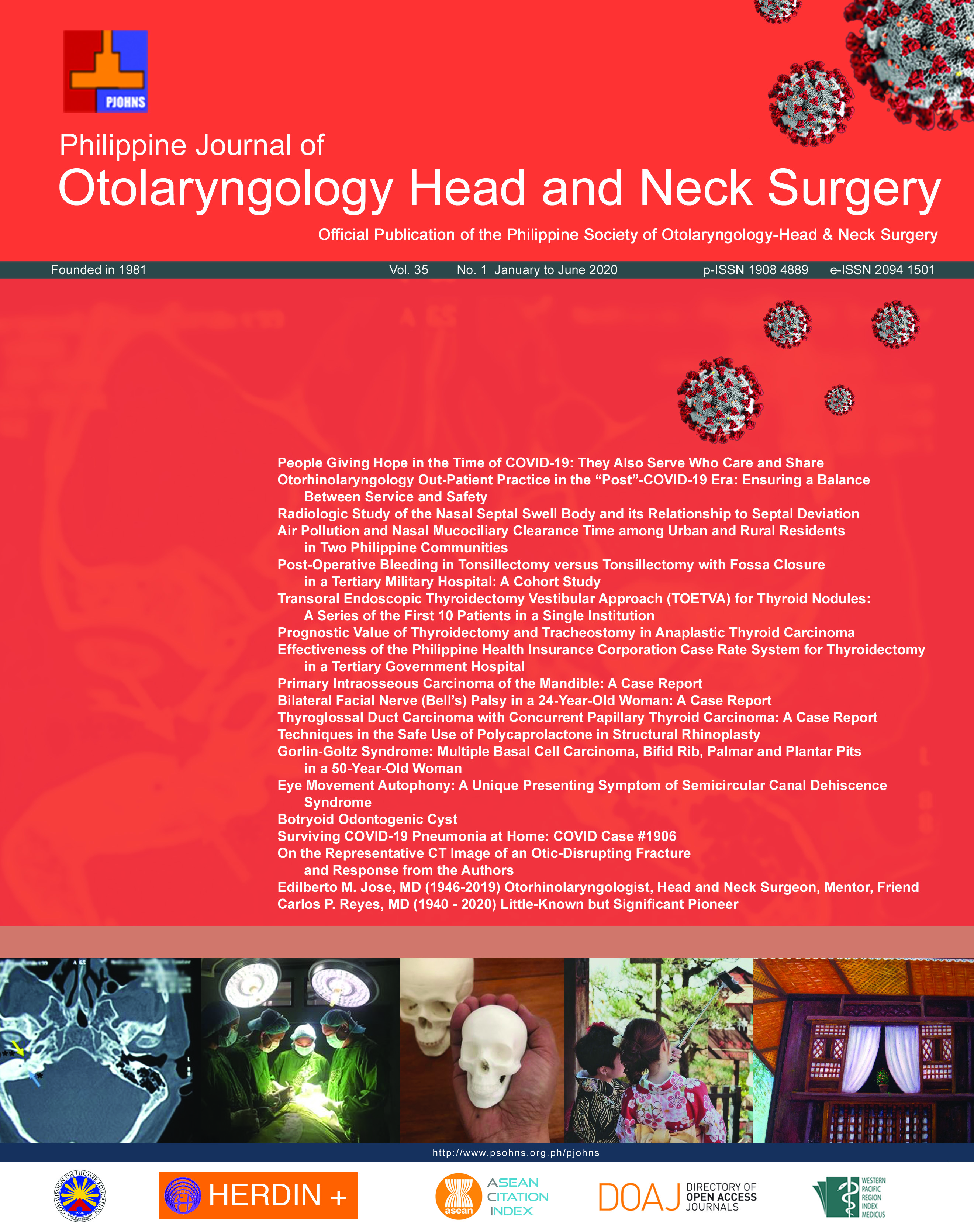 Vol. 35 No. 1 (2020): Philippine Journal of Otolaryngology Head and Neck Surgery