My father was a true blue “promdi” from Angeles City, Pampanga. A son of a humble businessman who grew up with 3 siblings. A happy-go-lucky teenager who sometimes got into trouble with the usual traps of growing up and never really cared about his future. With the carefree attitude growing up, he was given an ultimatum by my grandfather. “Son, if you won’t study and don’t get serious with your life, you will be a bum or a beggar on the street.” Having an epiphany, he started getting inspiration from an uncle who was an EENT doctor -- observing in his clinic during summer and that started the fire that built his career of becoming a doctor.

He graduated from the University of Santo Tomas Faculty of Medicine in Manila in 1959 then flew to the United States and had seven years of specialization -- first at the Elmhurst Hospital, New York City where he became Chief Resident in Otolaryngology. Not content with his training in ENT he decided to take a second specialty in Ophthalmology, with a three-year residency in Toronto East General Hospital in Canada. He could have stayed in North America to practice but opted to return to his hometown and serve his fellow Kapampangans, establishing Clinica Henson Eye, Ear, Nose and Throat Center in Angeles City.

He always liked to tell stories about his residency training days in the US. They did a lot of stapedectomy cases during those times and after every procedure the surgeon whispered in the ear of the patient and asked, “Who is the president of the United States” and the patient should answer “John F. Kennedy.” A memorable situation was while he was doing a tonsillectomy, the nurse said out loud that JFK had been just been assassinated. The most memorable memento he brought home after his training was a Zeiss operating microscope. His mentors told him he should buy one and bring it home to better diagnose and manage ENT cases especially otologic procedures. They said it was a good investment since his children could also use it in their future practice. I’m happy and proud to say that we still use this microscope in our clinic OPD in Angeles City.

His thirst for learning and improving his craft continued as he grew his practice. He did further training in Facial Plastic and Cosmetic Surgery in the 70’s at the University of California at Davies Sacramento USA and Shirakabe Clinic Osaka, Japan with the guidance of his mentor Dr. Jose Mathay. He eventually set up a cosmetic surgery clinic along Roxas Blvd in the 80’s and was one of the founding members of the Philippine Society for Cosmetic Surgery. His core competence was Rhinoplasty using silicone implant during those days. My mom, a fine arts graduate and portrait artist, helped in carving and designing the silicone implants. I must say that they were a perfect combination.

Most of his patients were the wives of military officers and personnel from Clark Air Force base during the 70’s and 80’s. He also practiced in St. Luke’s Medical Center, Quezon City.

Passion for teaching also led him to be a Professor of Otolaryngology at the University of the East Ramon Magsaysay Memorial Medical Hospital and Angeles University Foundation. I remember one of his students in UERM told me that his lectures also included life lessons, how to enjoy your practice and how to be a well-rounded doctor. He inspired a lot of students and residents who trained under him.

Growing up as the child of a doctor, my siblings and I were enthralled by his life as a medical man. He was well-respected in the community not just in medicine but also in government service. His passion to serve brought him into politics and he once served as a provincial Board Member of the province of Pampanga during the Cory Aquino administration. He was also very active in the Rotary Club both locally and internationally. He was a people person and everyone knew him. He had that certain charisma that lights up the room. As a family, we were known to be a tennis team. Everybody played including my mom and my brothers. He also enjoyed playing golf with my mom-- and don’t even ask who was the better player! Family dinner was usually spent in debates about medical and surgical cases with my mother as the referee.

He really took care of his patients. He always reminded us to give the best service to our patients because they travelled from faraway places just to see you. He never gave up even on challenging cases. I was always in awe when I saw him do local anesthesia on patients undergoing tonsillectomy and Caldwell Luc procedures after my residency. He always advocated using local anesthesia on almost all his surgical procedures. Seeing patients with him in the clinic has taught me a lot but it was also interesting and challenging because we sometimes debated on treatments in front of a patient.

I enjoyed travelling with him during conferences and courses abroad. He liked to update himself by observing in FESS, temporal bone and oculoplasty courses. These were our bonding moments as father and son and also with my brother Raoul who is an ophthalmologist[1]oculoplastic surgeon. One thing I miss most about him is when we used to do surgery together. When my brother and I encounter difficult or challenging cases he was always there to provide advice on how to go about it.

I am indeed lucky to have a father with the same passion and vocation. I hope I can continue the legacy with my children. I hope my father remains to be an inspiration to his former students and residents. A true gentleman to his family, profession and the community he served. 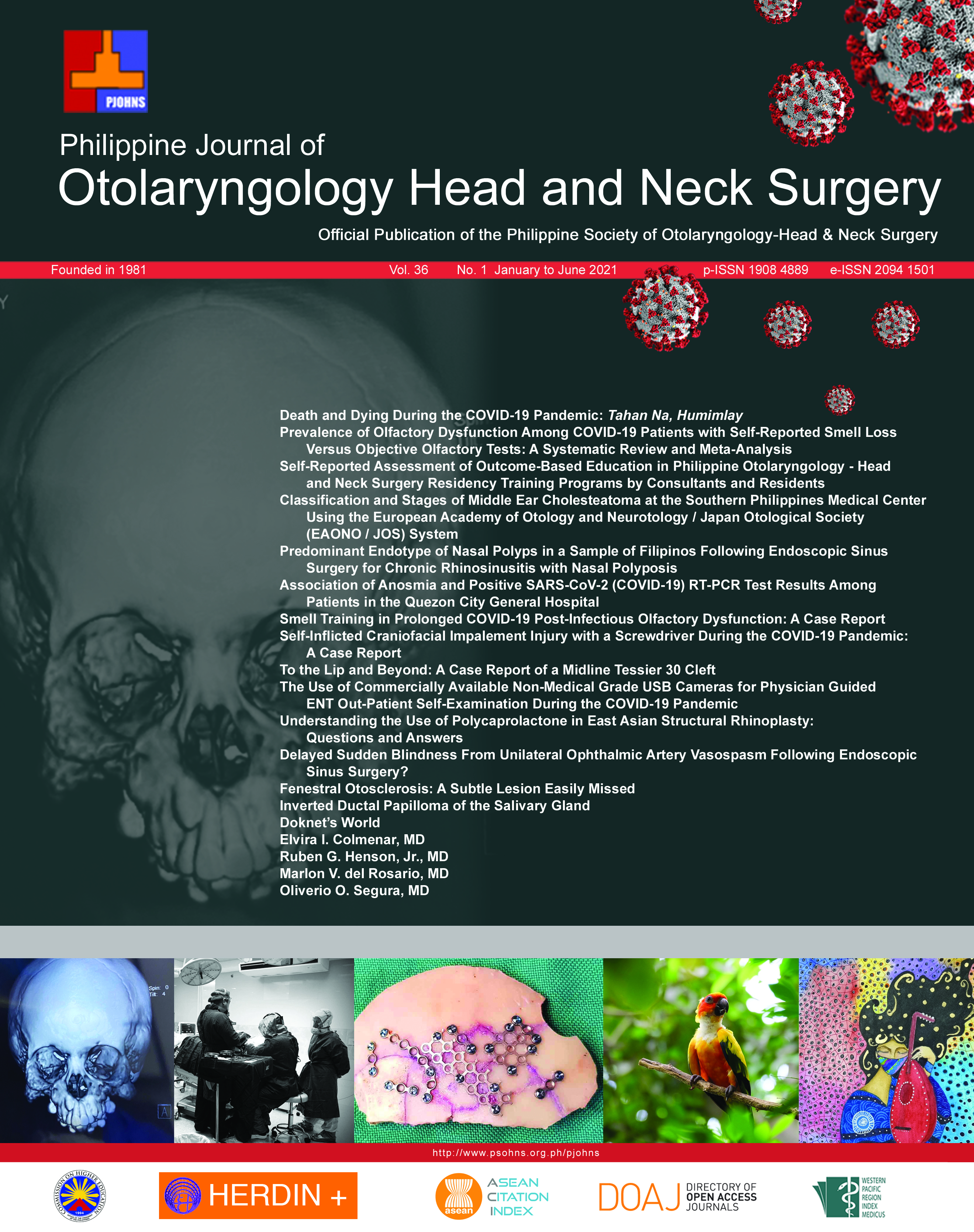