Rhetoric and Reality: Nomenclature and Notoriety

“We spin a web of dreams in our mind;

and so we travel on, but we never find;

the things in life we left behind1”

The act of naming establishes a power relationship between “namer” and “named”. In the patriarchal tradition, for instance, man’s dominion over the rest of nature was symbolized by the privilege of naming “all the cattle and the fowl of the heavens and all the beasts of the field.”2 We bestow names not only on our children, but on our pets, properties and subordinates. The terms “Nabinyagan” or “Nabansagan” refer to the informal process of such social assignations. The “namer” assumes dominance in the relationship over the “named.” The process is not reciprocal (at least not overtly). In Filipino culture, as in other vertically-oriented societies, subordinates/youth do not address superiors/elders solely by name, but by appending a title denoting the relationship between both parties (Lolo/Lola Tatay/Nanay, Tiyo/Tiya, Kuya/Ate, Diko/Ditse, Sanko/Sanse, Sir/Ma’am) Such practices are less evident in more horizontally oriented socio-cultural contexts such as North America, where grandparents and parents-in-law may be addressed by their first name alone.

The act of naming may also define3 (de, “completely” + finire, “to limit, set bounds, end”) reality for the bestower. Whether such nomenclature pertains to stars and planets, taxonomies of flora and fauna, the pharmacopoeia or computer language, recognition and use of a name allow one to understand it and to know some of its secrets. Like a magic key, using a name unlocks a relationship between the user and the person, animal or object named. Agreement on and shared use of such “rhetoric” by other observers constitutes “objectification” of what would hitherto be “subjective” reality, but may also promote “shared delusion” as was the case with the proverbial “Emperor’s New Clothes.”4 In such a situation, courage can hardly begin to describe the one who dares speak out, as he or she promptly becomes fair game for those who would prefer the delusions of darkness to the harsh realities of light. And prophets and bearers of bad news are notoriously unwelcome in their own country.

As is the case with any organization, professional associations are made up of individuals and aggrupations bound by shared interests as much as (or more than) by shared friendships. These shared interests find expression in shared terminologies, while concealing self-serving agendas. What happens when rhetoric does not match reality?

To call a spade a spade may be considered “impolite” and “undiplomatic,” yet coming “out of the mouths of babes” is refreshingly, disarmingly direct. Such requires the childlike ability to say things as they are, without rancor or hidden agenda. How often do we encounter empty words and phrases, devoid of meaning because the realities they supposedly point to do not really exist? How often do we ourselves silently conspire, by omission if not commission, to uphold such vacuous rhetoric? And in so doing, how much of our power do we invest in and ascribe to that which does not really exist? Does the fact that there are many of us sharing the same delusions make us less deluded? Were we more transparent in our dealings, would reality be more apparent?

This issue pays tribute to three colleagues who passed away this year, and coinciding with the 12th Asian Research Research Symposium in Rhinology, features a meta-analysis on intranasal corticosteroids for the medical management of nasal polyps in adults, a case report of intravascular lymphoma of the inferior turbinate, a grand rounds discussion of rhinophyma, a histopathologic case of sinonasal teratoid carcinosarcoma and practice pearls on nasal saline lavage. In addition, we have original and review articles in otology and audiology, a case report in oropharyngology, surgical innovations and instrumentation in otology and laryngology, and a radiologic discussion of ossifying fibroma.

Of the manuscripts submitted for possible publication, many did not comply with our instructions to authors, did not submit or revise in time to complete the editorial and review process, or did not comply with the process itself. In some cases, reviewers were not accorded the professional courtesy they deserved, considering their stature in their respective fields, and their kindness in performing the reviews gratis et amore. To them, we can only apologize in behalf of these authors, and reiterate our gratitude for their generous support. To the authors whose manuscripts are still in process, we look forward to seeing your articles in print in forthcoming issues, and thank you for “plodding on with us” as we strive to continue publishing a journal worthy of your scholarly efforts. In this regard, thanks are also due our PSO-HNS President Eutrapio S. Guevara, and the Board of Trustees for the continuing financial and management support. May we continue to receive this same support from you, our valued contributors and readers. 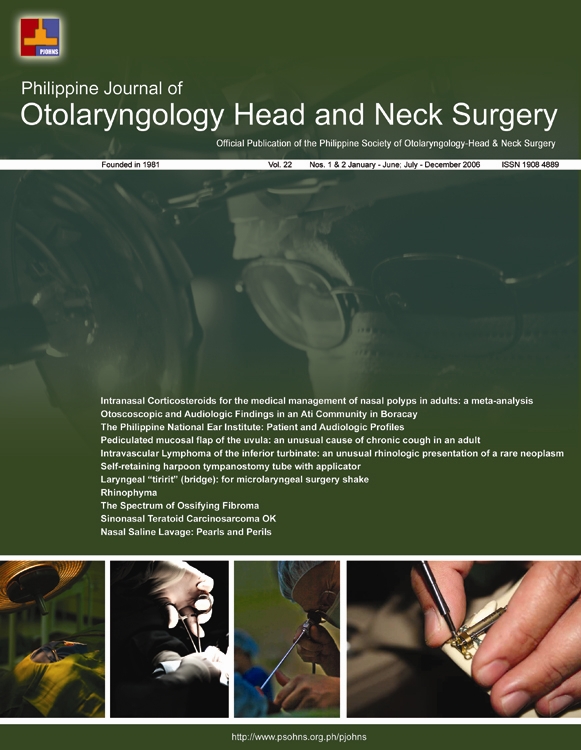